Today was my due date for baby #2. It’s a day marked with sadness, as our second pregnancy ended in a miscarriage last fall. It’s been a whirlwind since then as life has changed dramatically in a multitude of ways and has ushered in a new chapter. But we still mourn the loss of our little one. The following words were written in the midst of processing our grief, yet the courage to post wasn’t present. We’ve been encouraged by so, so many who have shared this grief and want be present on this journey alongside others, so we share today.

Yesterday was National Pregnancy and Infant Loss Awareness Day. Over the last two days, I joined the millions of women who mourn every day for the babies they never held. I became a face to the statistic of every one in four women experiencing the loss of life too soon.

Two weeks ago, I was eight weeks pregnant and counting down the days to May 9, 2016 when Karlos and I would be holding our new precious babe in our arms. Sofie would be ecstatic with joy at the thought of finally becoming the big sister she’s meant to be (these leadership skills are purposeful!) But with heavy hearts, we heard the news “I’m sorry to tell you that there isn’t a heartbeat.”

Those who knew about our pregnancy ushered us into mourning with great love and care. They’ve called, they’ve texted, they’ve cried, they’ve prayed. Many of them, too, have experienced the searing loss of a little one. Some haven’t, but still bravely enter the journey with us. Either way, none have forgotten the life that once lived and grew inside of me. Thank you, dear ones. Your love sees us through to stronger days.

Our hearts will forever mourn this baby who we never met beyond an early ultrasound. We will also wonder who you were meant to be, sweet one. And we can’t wait for our entire family to be united one day in heaven. We long for that day when “He will wipe every tear from their eyes, and there will be no more death or sorrow or crying or pain. All these things are gone forever.”

We live in Hope.

Jessica and I met in the hospital with our one week old newborns in our arms. In that sleep deprived memory, I think she heard us speaking Spanish and it prompted conversation (because it’s THAT RARE in our area!) We remet when our family started attending our current church and Jessica (y su familia) quickly become dear friends, as we now share cenas together regularly as part of a Spanish speaking small group. It’s an honor to have her share her story here and I pray that it’s an encouragement to all who seek to raise their families to celebrate multiple cultures. 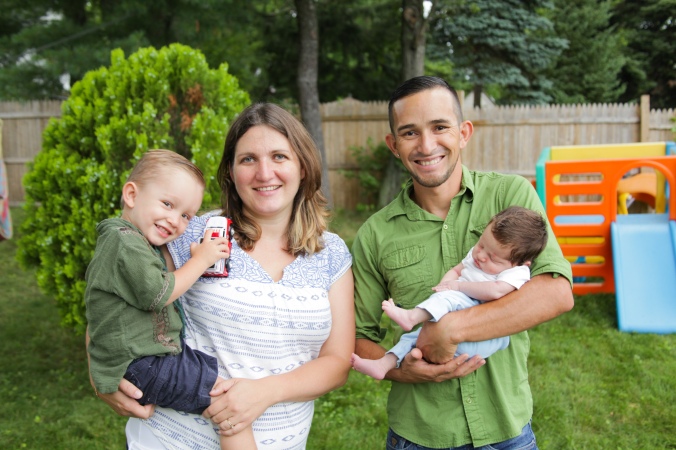 I had been thrilled to find the Spanish-language edition of Ezra Jack Keat’s award-winning “The Snowy Day” at our local used bookstore months ago. It wasn’t until this winter after Austin had heard stories about Christmas and snow, and had actually experienced his first snowfall of the season, that he took interest in the simple story of a young boy experiencing the joys of a fresh snowfall. I laughed to myself when I realized that in this one story Austin’s worlds came together. Austin’s dad is from Honduras, where Spanish is spoken but no snow falls and where parents don’t typically read bedtime stories to their children; I am from southern California and grew up surrounded by books, including “The Snowy Day”; and Austin and his little brother Caleb are growing up in snowy New England.

This fall someone described our family as being composed of a Hispanic father, a White mother, and two Hispanic boys. Really? Hispanic boys? What about their White mother? My immediate response was indignation that my ethnicity had disappeared from the equation. But the reality is that I don’t know if our children will grow up to be either White or Hispanic, or even gringacho (a mix of gringo and catracho). They are part of a generation who will have a difficult time checking any box in particular when asked their ethnicity. These days, one is better off identifying with the neighborhoods we grew up in rather than our race. This comment is not to mean my husband and I don’t take pride in where we come from or that we don’t try to instill that same pride in our children. We do. But during the third year of our son’s life, it has already become apparent that Austin will be just as influenced by our community as he is by the environment we create at home.

In reality, the environment we create at home is just as influenced by our community as it is by my husband and I. Take food as an example. When we first got married, Rafael called up his sister whenever he missed una comida típica. The two of us would follow her instructions to make the dish, so that the next time I would be able to make it on my own. Living in Texas, it was not difficult to find most of the Central American ingredients (although the cheeses and creams I found were often more Mexican than Honduran). Where we now live north of Boston, I have had to become more creative with ingredients. After two cities and eight years of evolution in my kitchen, every dish Dilcia has taught me has now taken on a North American flair – higher fiber, lower fat, different spices, parmesan cheese in place of queso fresco, etc..

Language, el idioma, is another example. Before Austin was born, we learned from parents who followed the “One Parent One Language” model for bilingual families that it was a struggle to get their children to speak anything but English once they started going to school. So my husband and I decided that we would both speak Spanish with our children. It was even easier when Rafael’s niece came from Honduras to live with us for three months at a time, once when Austin had turned a year old and once when he was two and a half years. But at three years old, Austin is starting to replace single words with sentences in English when he speaks to us. Rather than “Agua,” he tells me, “I want water.” He corrects me, “Not gradas, stairs.” It doesn’t help that with the arrival of Austin’s little brother (and with him, a loss of energy), I respond to my husband in English more and more. While I do not want to discourage my son’s current language development, I try to bolster the Spanish influences. The children’s room at our local library only has two Spanish titles for his age group, so I comb through the foreign languages box at the used bookstore for treasures like “Un Dia de Nieve.” I set the Netflix and Verizon settings to the Spanish language, so any cartoon that is dubbed in Spanish will automatically play on that setting (although most of his favorite shows are only in English). When his grandma wanted to buy him a kids tablet for Austin’s birthday, I made sure to get one with access to Spanish language learning games.

And then there is futbol. Rafael grew up playing the sport anytime he could get out of the house to the closest patch of green where the neighborhood boys were playing. He got into trouble so often for ruining his shoes that he would slip them off and play barefoot. Although I also spent hours outdoors with the neighborhood kids, I didn’t play soccer until my mom enrolled my siblings and I in recreational soccer. Since I never excelled athletically, I left organized sports behind once I reached eighth grade. Our sons only have the luxury of neighborhood free play half the year, when there is enough light and warmth after school hours for the neighborhood kids to be out on the sidewalk. Like it was for me, it will be difficult for them to find kids to play soccer with outside organized leagues. But since Rafael plays indoor soccer one or two times a week, the boys have the opportunity to join him on the sidelines. Already, Caleb often stays home with mom while Austin joins dad at his pickup games.

Regardless of these little struggles of bringing up our sons the way we’d hope to, the community our family has found since moving to Boston’s North Shore is one I am truly happy to raise my kids in. Although the majority of the families in our neighborhood could be described as White, they applaud our efforts to raise Austin and Caleb bilingual. And most of the families we spend time with are of foreign or mixed heritage: North, Central, and South American, Asian, African, Australian, and European. Since neither my family nor my husband’s live by, our close friends have become our family. We have made friends who model to our boys the highest two commandments in the Bible: loving God and loving their neighbor. The children do speak English together and the food we share does not promote any particular ethnic flavor; with these families in our lives, I am proud to watch our sons are grow up White, Hispanic, and a whole mix of other ethnicities.

So, it’s been kinda quiet over here on My Gringa Life – sorry! My Real Life has been a bit insane this fall. The biggest news being that, as of this morning, we officially closed on our first home! We are thrilled and terrified – the normal mix of emotions for most first time homebuyers 😉

I am beyond excited for what this means for our ministry as a family. Ever since our wedding, we’ve cramped youth groups and small groups and families visiting into our tiny apartments. We recognize that the Lord provided this house and our desire is that He would be glorified with ministry that will happen within it’s walls.

I stumbled upon a beautiful blessing and couldn’t resist sharing. May this be our heart’s desire each day we are gifted with this home:

Lord, bless our house, that it may be a home full of love and peace.

Bless the open door, may it be as two welcoming arms opened wide.

Bless the windows that let the sun in each morning and let the stars that are bright with hope peek in.

Bless the walls that defend us from the wind, the cold and are our friends in the hours that pass.

Bless the roof that blankets the cares of today and the dreams of tomorrow. That it may always protect the holy memory of the lives that have gone.

Bless the feelings, the tenderness, the longings that will flourish in our lives.

Bless the thoughts that we have, may they be pure. The words that we use, that they may be correct and that our actions would lead us to You.

Bless our hours of peace and silence, that they would strengthen our spirits.

Bless our hurts and our joys because they are the heart of the family.

Lord, stay with us

What la Gringa is Reading

Snake Oil: The Art of Healing and Truth-Telling

Living the Sabbath: Discovering the Rhythms of Rest and Delight (The Christian Practice of Everyday Life)

A California girl with a Guatemalan heart, who is finding out that living life in-between can be somewhat complicated.

Navigating the journey of a bicultural marriage/family/life.

Formerly Fundie
A Life with Subtitles

Navigating the journey of a bicultural marriage/family/life.

A community for bilingual, bicultural gente